Many people will tell you that the sunsets in Santorini are the best on the planet, and when you experience it on your first night in this Aegean escape we’re sure you won’t argue. Undoubtedly the prize pick of all the Greek islands, this head-turner is a veritable vision of escapism. The Caldera offers stunning views of the rugged volcanic landscape and the neighbouring islands are always within reach for some day tripping. There’s also a wealth of both sandy and pebble beaches for you to get some well-deserved rest and relaxation. Greece is always a favourite with holidaymakers, but Santorini has a serious fan club thanks to its jaw dropping scenery of multicoloured cliffs and vivacious volcanic terrain. Book a 2021 Santorini holiday with Love Holidays and you’ll soon discover why. The Cyclades group of island includes Mykonos and Ios, which are close by and well worth a visit. It’s all just a few clicks away.

Kamari holidays will take you to the south east coast of Santorini. Located in the Aegean sea south of Greece …

Holidays to Fira or Thira will take you to the beautiful capital of the pretty Greek island of Santorini. Lying …

Pyrgos holidays promise a stunning location in the highest village of Santorini island in the Aegean Sea. From its picturesque …

From €391 per person
View all Santorini resorts

Your guide to Santorini holidays

Standouts on this beautiful island are sure to be the unforgettable sunsets, romantic ambience and the relaxed way of life here. But there’s also a range of things to do here to stimulate all the senses. From exploring the deep waters of the Aegean Sea, to delving deep into some history at some of the island’s cultural heritage sites, there’s enough here to please any kind of holidaymaker. Santorini also houses one of the most iconic archaeological sites in all of Greece, the Bronze Age settlement of Akrotiri, which was buried in volcanic ash long ago. If it’s romance you’re after, or if you’ve already found it, the island’s luscious setting provides a truly romantic backdrop. Elsewhere, cosy seaside villages like Kamari and Perissa are popular with visitors for their abundance of black sand and picturesque pebbly beaches. Unquestionably, this is an island with more than meets the eye, and we guarantee Santorini’s volcanic forces will work their magic on you.

Without a doubt, Santorini’s breathtaking coastline is one of the island’s main draws for tourists each year. The sun-soaked crescents are well suited for all kinds of water activities including snorkelling and scuba diving, as well as simply kicking your feet up and chilling with a good book as you sizzle in the sun. Why not hop on a boat and soak up this gorgeous coast while cruising along the island’s shoreside villages? With shimmering azure waters, red, white and black sand, and vertical cliffs and fantastic rock formations, Santorini has some of the most unique beaches on the planet. Influenced by its volcanic past and the distinctive lunar landscape, Santorini’s coastal treasures are definitely one of a kind. Beach bums that favour their peace and quiet, and aren’t afraid to get off the beaten track, will be surely rewarded on the island’s eastern side. With wild and untamed beaches that are hardly ever frequented, these private dunes can be found in Xiropigado, Vourvoulos and Exo Gialos. Take our advice and seek them out.

If you’ve found yourself in Santorini then you’ll surely have to do as the locals do and sample all the locally produced sweet white wine – it’s incredibly delicious and refreshing in the blistering heat and perfectly fitting amidst the white-washed villages. Produced by vineyards on the main island of Thira, this delicacy is practically created for enjoying with one of Santorini’s famous sunsets in the distance from the rooftops of Firostefani. If we’ve piqued your interest, then there are also plenty of winery tours available near Akrotiri, with volcanic ash vineyards providing unique charm. But it’s not all about the alcohol here, as Santorini also provides plenty of gastronomic delights for you to tuck into. Be sure to sample the beautiful dishes with fresh cherry tomatoes and capers, and homemade fava dip a favourite with the locals. In the capital of Fira, there’s no shortage of high-end restaurants and gyro shops alike, while seafood fanatics should head for the seaside tavernas of Perissa.

For all its reputation as an idyllic hotspot for honeymooners and lovers gazing longingly at the sunset, and into each other’s eyes, Santorini actually has its fair share of nightlife, if you know where to look. Most Greek islands have a party image, and while this Aegean escape isn’t as famous as Ios or Mykonos for its nightspots, it does have a number of relaxed and localised nightlife available when that gorgeous sun begins to set. Clubbers will want to head for the capital of Fira, where you will find most, if not all, of the island’s late bars and clubs. Who knows, you may even brush shoulders with an international A-lister while ordering at the bar, or even one of the local celebs. Revellers should head for the buzzing main square of Fira to get the party going, and the best option is a bar hop to see what take your fancy. Expect cover charges of 10 euros in most nightclubs, and while the vibe is relaxed, don’t expect to get in wearing swimming trunks.

While admittedly better suited for a couples holiday or for those that are looking to de-stress and de-compress, there’s a number of activities your kids might enjoy in Santorini. Your budding water babies will love splashing around on the beautiful beaches of Monolithos, Avis and Kamari, with plenty of water sports and activities also available. As if that wasn’t enough there’s also a major water park in Perissa with an abundance of slides, wave pools and amusements to keep them entertained for a day at least. If your clan has more refined tastes, then they may enjoy fishing for the first time on one of the island’s many fishing locations, or taking a boat trip around the island as the sun begins to set in the distance. There are also a number of museums and heritage sites to get stuck into Santorini’s volcanic past, including the ancient city of Mesa Vouno.

If you hadn’t already gathered, Santorini is one of the most romantic places on the planet for a couples retreat. Did we mention the sunsets? Book a holiday for you and your beau with Love Holidays and you’ll soon be kicking back in a hot tub as the sun sets in the distance. Top of the agenda for a couples getaway should definitely be an afternoon spent ambling around the island’s picturesque vineyards near the Akrotiri region, hand in hand. Next up should be a visit to the island’s hot springs and wait for the volcanic forces to whip up some romance. Nothing says danger like an active volcano, and if this doesn’t get you clinging to each other, nothing will. Top off a romantic evening with a sumptuous meal in one of Santorini’s many scenic restaurants to enjoy that sunset, night after night. For our money, any of the eateries along the village of Oja will be perfect.

If you’re looking to get the pulse racing a bit, then you really need to delve deep into Santorini’s volcanic history, and discover the parts of the island split when the volcano erupted in 236 BC. You also have the unique opportunity to explore the island by boat, as cruises are offered to the volcanic islets, with the tour anchoring for you to explore the rugged terrain on foot. If all that volcanic activity gets too hot for you, you can always cool off with a spot of snorkelling, kayaking or another water activity amidst Santorini’s weird and wonderful coastline. If you really want to catch a bird’s eye view of this white-washed  paradise, then book onto a thrilling helicopter ride. Time it just right and you can even fly off into the sunset, like Icarus himself.

Often believed to be the site of Atlantis in Greek mythology, it’s no wonder Santorini houses a plethora of archaeological sites, volcanic hotspots, museums and heritage centres. After a period of refurbishment, the Bronze Age settlement of Akrotiri, buried in volcanic ash long ago, is back open to the public and ready to be explored by you. The site is without a doubt one of the most fascinating and culturally significant archaeological sites on the Greek islands, if not the whole country. On the opposite side of the island, be sure to uncover the settlement at Thira, which was home to settlers on the island from the 9th century BC, right up to Roman and Byzantine times. If museums are more your bag, then there’s no shortage, with the Archaeological Museum, Museum of Prehistoric Thira, Megaro Gyzi Museum and the Folklore Museum of Santorini all firm favourites with culture vultures each year. As achingly beautiful as the island is, it would be a shame to miss out on Santorini’s fascinating past during your trip. 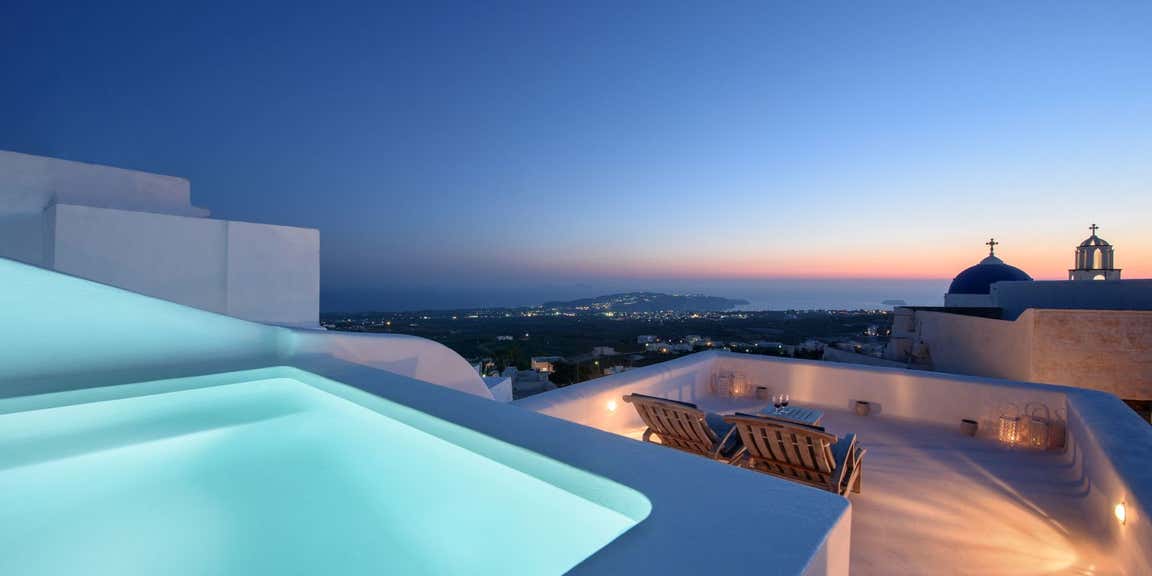 From €886 per person Check availability 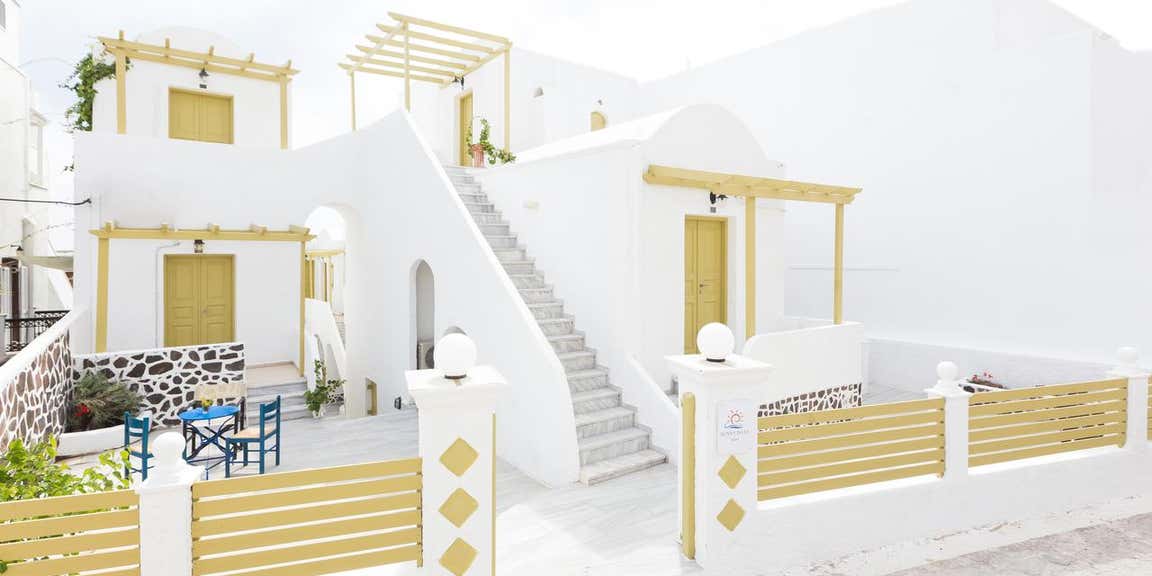 From €389 per person Check availability 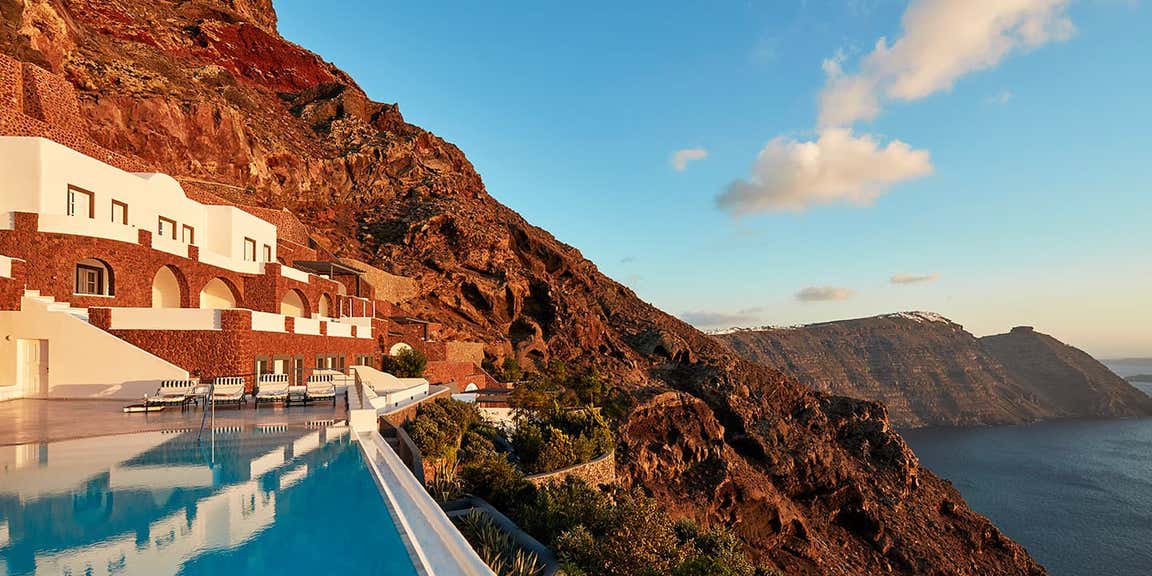 From €854 per person Check availability
View all Santorini hotel deals 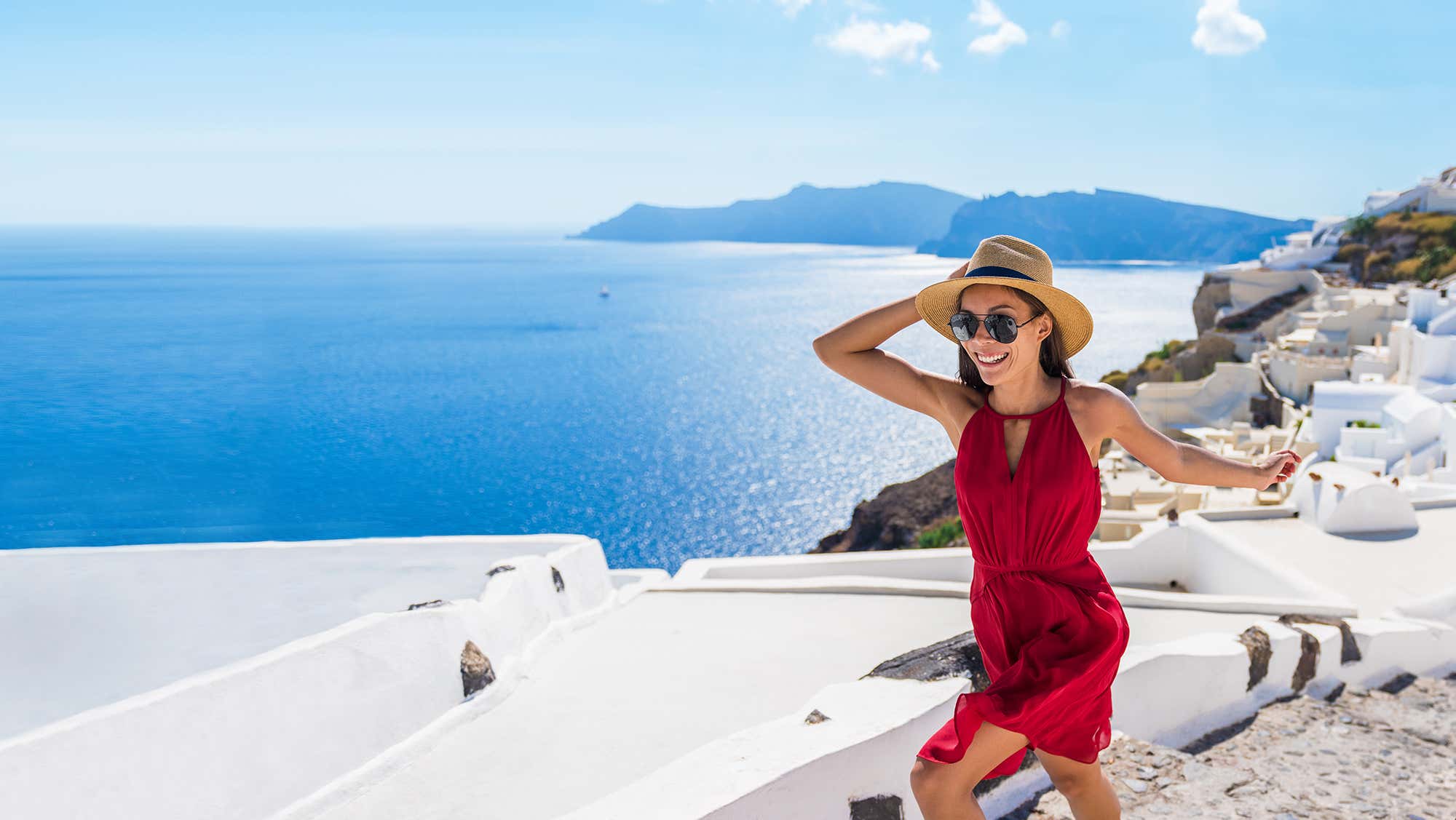